In my quest to getting to know ES6, I used the new sexy "arrow functions" quite a lot lately. But until today, I didn't understand why they were necessary and that there even is a difference between arrow functions and "normal" functions 🤯. (Spoiler: No, it's not just to be quicker to write).

What are arrow functions? 🧐

Arrow functions are the new ES6-way to define functions. Let's write a function that calculates the square of a number with the ES5 syntax:

Two more arrow function features could make this even shorter:

Applying all of this gives us the following code:

Neat! We have a sexy little ES6 function.

What is the difference between the two? 🤷‍♂️

Short version: Arrow functions don't have their own this-binding. What what? Let me try to explain how I understood it.

How arrow functions behave with objects

When we add a function as a property to an object, it's called a method. In a method, you can access the this keyword to access other properties of the same object, as follows: this.myProperty

So, we have an object here that is an object that contains comic heroes and we want to print out a title that includes a property of the object (universe). Again, first in ES5 writing:

Since the code is the same, the result of both should be the same, right? No, that's not the case. Here it the output of the code above:

This seems weird now but will make more sense in a minute. this in the regular function refers to the object itself, while this in the arrow function does not bind! 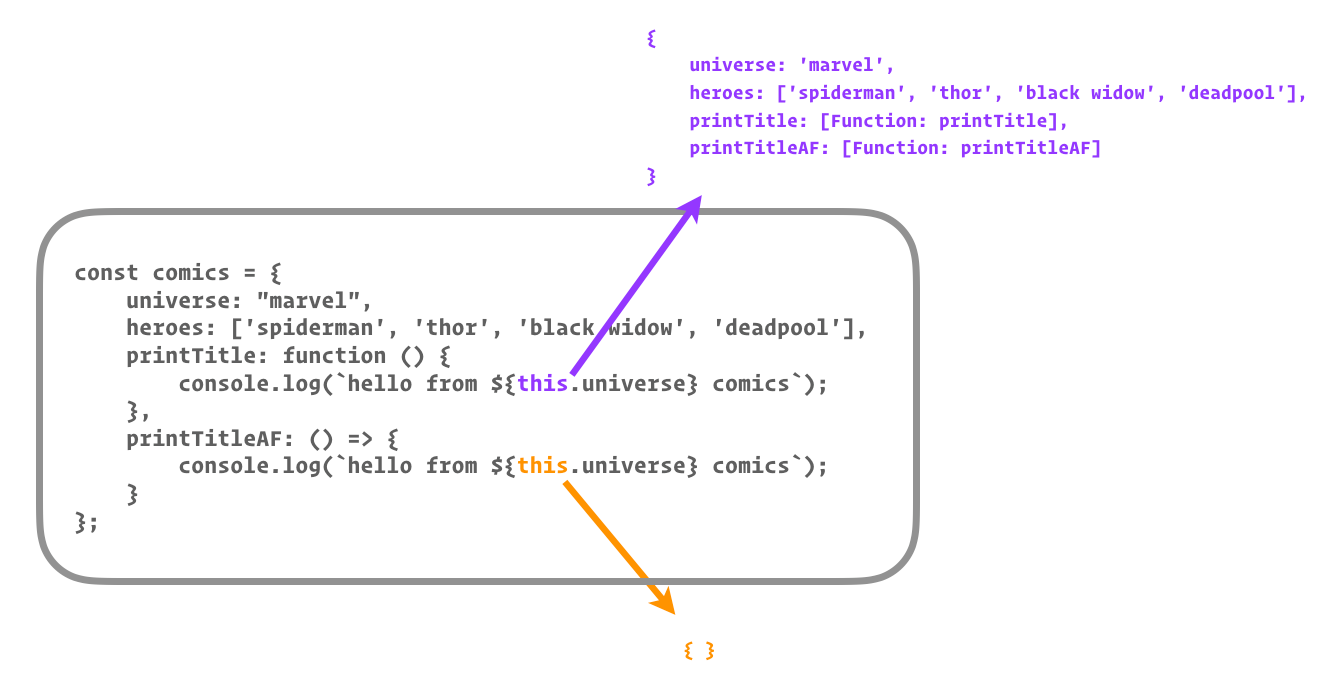 As you can see in the image above, the this keyword behaves differently in both functions, even though they are seemingly the same.

So, the arrow function notion cannot be used to define property functions. However, there is a cleaner way to write them in ES6. Just leave the colon and function keyword out:

When you can use arrow functions

Arrow functions are useful whenever you have something that requires this not to be bound to function itself, but rather the context—for example, passing it as a parameter to another function such as Array.forEach or setTimeout.

That works fine because this is not bound to the function itself.

Now you might be thinking, "ok cool, but what if I am using ES5 in a project and need that exact behavior?"

Well, then you need to build a dirty workaround that you can find in many places. You place this in variable:

The whole this topic is one of the most complicated and annoying things when learning JavaScript, and it behaves in strange ways. But I hope this explainer helped a little bit of understanding.

When you need the context you're working in within your function when you pass it somewhere; it can be very helpful to use it. But before using arrow functions, evaluate if it really is what you need.

I found for getting a better grasp at the topic, it's useful to write some code trying it out on yourself, and pretty soon, it will not be that a big mystery after all.

ES6 comes with many new features. One of which are a few very handy `Array` functions. The most popular for doing daily tasks are `.filter()`, `.map`, `.reduce()`. In this post, I'll cover each one with examples of first the "old" way, then with these new functions.